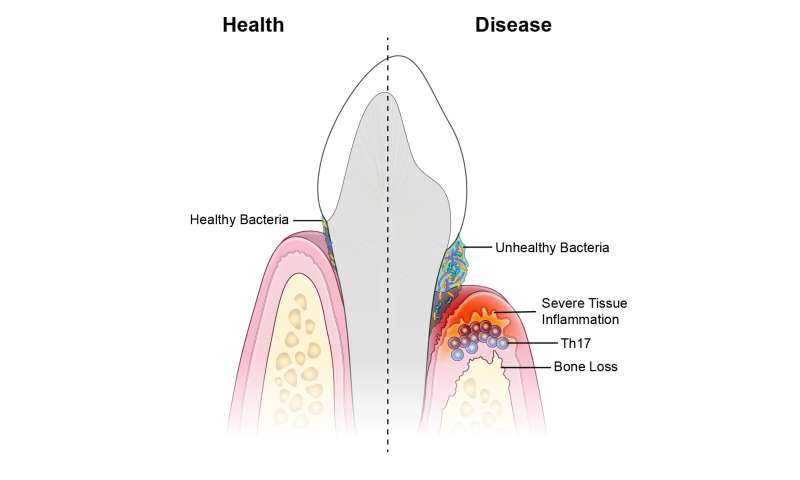 An unhealthy population of microbes in the mouth triggers specialized immune cells that inflame and destroy tissues, leading to the type of bone loss associated with a severe form of gum disease, according to a new study in mice and humans. The research, led by scientists from the National Institute of Dental and Craniofacial Research (NIDCR) at the National Institutes of Health and the University of Pennsylvania School of Dental Medicine, Philadelphia, could have implications for new treatment approaches for the condition. The findings appear online Oct. 17, 2018, in Science Translational Medicine.

Periodontal disease is a common disorder that affects nearly half of American adults over age 30, and 70 percent of adults 65 and older. In those affected, bacteria trigger inflammation of the tissues that surround the teeth, which can lead to loss of bone and teeth in an advanced stage of the disease called periodontitis.

"We've known for years that microbes stimulate inflammation. Removing bacteria by tooth-brushing and dental care controls inflammation, but not permanently, suggesting there are other factors at play," said study senior author Niki Moutsopoulos, D.D.S., Ph.D., a clinical investigator at NIDCR. "Our results suggest that immune cells known as T helper 17 cells are drivers of this process, providing the link between oral bacteria and inflammation."

Moutsopoulos and colleagues observed that T helper (Th) 17 cells were much more prevalent in the gum tissue of humans with periodontitis than in the gums of their healthy counterparts, and that the amount of Th17 cells correlated with disease severity.

Th17 cells normally live in so-called barrier sites—such as the mouth, skin, and digestive tract—where germs make first contact with the body. Th17 cells are known to protect against oral thrush, a fungal infection of the mouth, but they are also linked to inflammatory diseases such as psoriasis and colitis, suggesting that they play dual roles in health and disease.

To better understand this dynamic, the NIDCR scientists teamed up with an NIDCR-funded research group led by study senior author George Hajishengallis, D.D.S., Ph.D., at the University of Pennsylvania School of Dental Medicine and colleagues from NIH's National Institute of Allergy and Infectious Diseases (NIAID) and National Cancer Institute (NCI).

The scientists found that similar to humans, more Th17 cells accumulated in the gums of mice with periodontitis compared to healthy mice, which served as a control group.

To see if the oral microbiome might be the trigger for Th17 cell accumulation, the researchers placed mice on a broad-spectrum antibiotic cocktail. They found that eliminating oral microbes prevented expansion of Th17 cells in the gums of mice with periodontitis while leaving other immune cells unaffected, suggesting an unhealthy bacterial population triggers Th17 cell accumulation.

Next, the group wanted to know if blocking Th17 cells could lessen periodontal disease. When the scientists genetically engineered mice to lack Th17 cells, or gave the animals a small-molecule drug that prevents Th17 cell development, they saw similar outcomes: reduced bone loss from periodontitis. RNA analysis showed the Th17-blocking drug led to reduced expression of genes involved in inflammation, tissue destruction, and bone loss, suggesting that Th17 cells may mediate these processes in periodontitis.

Finally, the researchers studied a group of 35 patients at the NIH Clinical Center with a gene defect causing them to lack Th17 cells. The scientists reasoned that if Th17 cells are as important to periodontitis as the animal studies suggested, not having Th17 cells should protect against gum disease. This is indeed what the group found—the patients were less susceptible to the condition and had less inflammation and bone loss compared to age- and gender-matched volunteers.

"Our clinical observations point to the relevance of our animal studies to humans and provide further evidence that Th17 cells are drivers of periodontitis," said NIDCR researcher Nicolas Dutzan, Ph.D., first author of the paper.