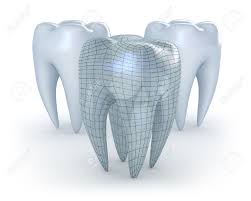 The 3D printing innovation is cutting edge, but the ability to reproduce a tooth while you wait in the dental chair is actually not new. “It’s been around for about 30 years,” explains Dr. Sharde Harvey, a New York City-based dentist who been using the method called CEREC (Chairside Economical Restoration of Esthetic Ceramics) since 2005.

Developed in the University of Zurich, CEREC is more akin to computer-assisted sculpture than printing. While 3D printing creates an object one micro layer at a time, CEREC carves out or “mills” a new tooth from a piece of porcelain aided by scanners and 3D modeling software.

The race is on to come up with faster, feasible 3D printing techniques.

Both methods allow dental practitioners to replace teeth, crowns, veneers, and inlays in a single sitting. The advantage of 3D printing over milling is that the process is better able to custom manufacture an object with intricate details—think about a tooth’s irregular grooves, crannies, and valleys. The problem with 3D printing was that it used to take a very long time.

Now the race is on to come up with faster, feasible 3D printing techniques. Barely a week after Carbon3D’s unveiling, the Australian company Gizmo 3D announced that they’re working on a “super fast SLA [stereolithography] style 3D printer” that challenges Carbon3D’s print speeds.