Are you brushing your teeth too hard? 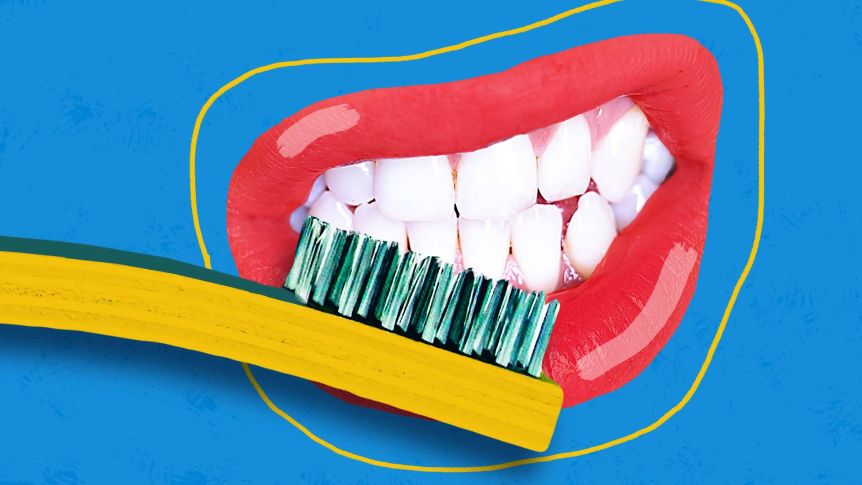 Many of us approach the task of toothbrushing with the enthusiasm of an army cadet trying to clean their dirty boots — we figure the harder we scrub, the better the result will be.

Be gentle with your gums

While teeth themselves are hard, the gums that surround them are not.

You do need to clean along the line where the gum meets your teeth, but brushing with too much pressure (or with too firm a toothbrush) can do more harm than good because it can wear away the thin top layer of gum.

"Once you cause the gum to recede, which means it shrinks away from the neck of the tooth, it's usually irreversible, it won't grow back," he says.

This exposes the neck of your tooth where there is no hard enamel covering the soft inner tooth layer called dentine.

The enamel, which helps protect against decay, covers only the part of the tooth that isn't covered by the gum.

Once the dentine is exposed, your tooth is more vulnerable to decay from bacteria feeding on remnants of food.

It can also cause your teeth to become highly sensitive because of exposed nerve endings in the porous dentine.

This can make it difficult to eat or drink anything cold, hot or sweet.

As well, eroded gums can look unpleasant as the exposed dentine is a dull yellow colour, unlike shiny white teeth that have their enamel intact.

A factor known as your "dental biotype" can also influence how careful you need to be about not brushing too hard.

Some of us are born with thinner gums (and jaw bones) than others and are therefore likely to be more prone to gum recession.

If you have a 'thick' biotype, your jaw bones are more substantial and your gums are more "thick and fleshy looking", Dr Alldritt says.

"People who have a thick biotype could probably get away with brushing a bit harder and it might not cause any damage," he says.

Plaque becomes tartar in a week

We brush our teeth to remove plaque — the white- or cream-coloured sticky material which causes decay.

Plaque is made up of bacteria, residues from saliva, and bits of food.

"People think the harder you brush, the better you're going to clean that plaque off, but plaque is actually soft," Dr Alldritt says.

Plaque is often confused with a harder substance called tartar or calculus, which builds up when plaque is left too long on your teeth and starts to absorb calcium out of your saliva.

Plaque can become tartar in as little as a week.

You can't remove tartar with a toothbrush; your dentist needs to do it with a special tool called a scaler.

To remove plaque — and prevent the build-up of tartar — it's good brushing technique, rather than brushing hard that matters most.

"Your toothbrush needs to be aimed at the gum line, that's the most important thing," Dr Alldritt says.

"If you're not getting your toothbrush at the gum line, you're not reaching where the plaque starts to grow."

He says you should also use a circular brushing motion.

"Never [use] a back-and-forth motion like you're scrubbing your shoes with a brush," he says. "The upwards stroke of the circle is hopefully going to sweep the plaque away."

Which toothbrush is right for me? 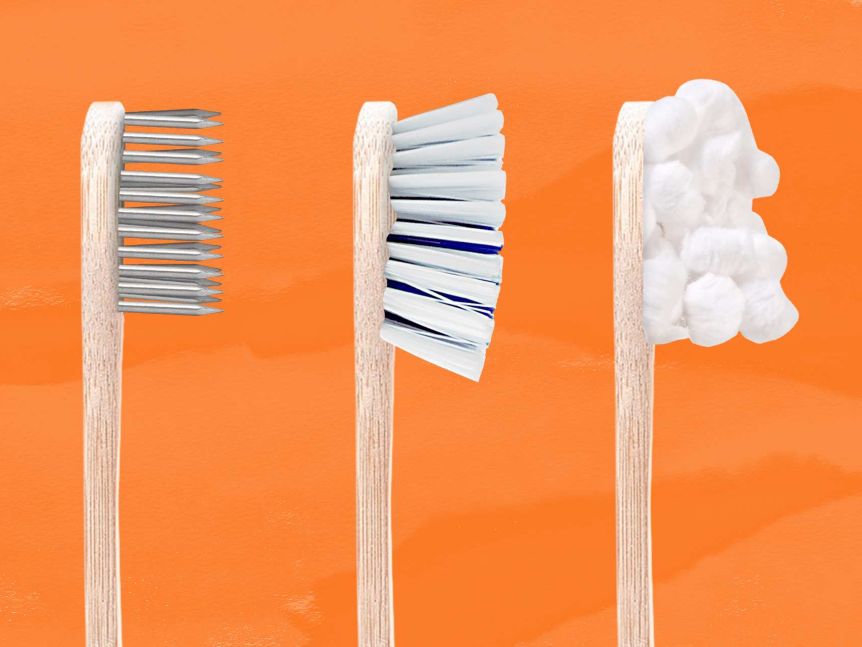 While the availability of soft, medium or firm toothbrushes might suggest the choice is simply a matter of personal taste, Dr Alldritt says you should only ever choose a soft brush.

"Sure, a harder toothbrush will get the plaque off, but it will get some of the gum and dentine off, too," he says.

"We haven't got any power over what companies put on the shelves, unfortunately. But we always recommend using a soft toothbrush."

The brushes on electric toothbrushes are always soft, he points out.

They also work using the desired circular brushing motion, but with the right technique, a soft manual toothbrush should work just as well as an electric one.

If your gums are damaged

If you've already got some gum recession from overbrushing, all is not lost.

"We can't make the gum grow back but there is some promise in gum-surgery techniques," Dr Alldritt says.

"We may be able to do some re-grafting [and] your dentist may refer you to a periodontist [to investigate this]."

To improve the pain and discomfort of sensitivity, there are specialised toothpastes, mouth rinses, varnishes and gels which may be helpful.

These contain desensitising agents that block the pores (known as tubules) in dentine, helping to stop pain sensations from reaching the tooth nerves, and disrupting the transmission of pain signals from tooth nerves to the brain.

However, Dr Alldritt cautions against self-diagnosing sensitive teeth as being due to overbrushing.

There can be many other causes including cavities, inflamed nerves, cracked teeth, broken fillings and even clenching and grinding your teeth.

"I wouldn't want people to assume that just because they've got sensitive teeth, it's from gum recession and think, 'Oh well, I'll just use sensitive toothpaste'," he says.

"It's important to get the problem diagnosed."

Wait 30 minutes after consuming anything acidic as this gives time for the tooth enamel to re-mineralise or harden before you brush.

This is general information only. For detailed personal advice you should see a qualified medical practitioner who knows your medical history.

This story, which was originally written by Cathy Johnson and published by ABC Health and Wellbeing, was updated in 2019.