Do I Really Need to Brush My Teeth for 2 Minutes Twice a Day? 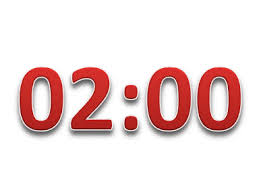 Some things feel like they’re going to take forever, even if they actually won’t take long at all. Think: standing in line to go to the bathroom when you really have to pee, waiting for the train to come when you’re running late, and brushing your teeth for long enough to make your dentist proud.

Your dentist probably told you to brush your teeth for two minutes twice a day, no exceptions. Maybe you stick to that for a week or two after every appointment, then start to slack off. Hate to say it, but this 2-minute-twice-a-day rule isn’t arbitrary.

Research shows that brushing your teeth is non-negotiable, but also that doing it for at least two minutes twice a day is great for your oral health.

This recommendation comes straight from  experts’ mouths: The American Dental Association (ADA) says you should be brushing for two minutes twice a day. But experts didn’t just pluck this number from thin air—science shows it really can boost your oral health, Sally Cram, D.D.S, a periodontist based in Washington, D.C., tells SELF.

A 2016 systematic review of 33 articles published in Journal of Dental Research found that brushing fewer than two times a day was consistently associated with more tooth decay, aka cavities, than brushing twice a day or more. Tooth decay happens thanks to plaque, a sticky, bacteria-laden film. These bacteria produce acid that eats away at your enamel, the hard outer covering on your teeth. They can also damage your gums and cause gingivitis, the first step in gum disease (aka periodontitis).

Dr. Cram says some research gets even more specific, showing that brushing your teeth for two minutes leads to a greater reduction in plaque than brushing for one minute does. A 2012 systematic review of 59 papers published in International Journal of Dental Hygiene found that, on average, people who brushed for one minute removed about 27 percent of plaque. When people brushed for two minutes, they removed around 41 percent of the plaque on their teeth, so almost twice as much.

If you brush for fewer than two minutes twice a day, you might not be cleaning your teeth thoroughly.

While two minutes might seem like a long time, it helps ensure you’re covering all the ground (or teeth) you need to, Vera Tang, D.D.S., New York City-based dentist, tells SELF.

If you’re only spending, say, 45 seconds brushing your teeth, odds are you’ll miss some of these spots or not give them enough attention, Dr. Tang says. That can allow plaque to remain and harden into tartar, which simple toothbrushing can’t remove. Your dentist will need to scrape it off, which is so enjoyable and fun for you, except it’s not.

If you want extra credit, you can brush your teeth more than twice a day, but it’s usually not required for good oral health.

Spending more than four minutes a day brushing your teeth isn’t necessary for most people, Dr. Cram says. But there are some reasons you might want to. If you eat a lot of sugary snacks, it might make sense to spend more time brushing or to brush more frequently. If you have a history of gum disease, you might want to brush your teeth a little more, too. Same goes for if you have any kind of orthodontia that makes it harder to adequately clean your teeth.

But for the most part, the experts say, brushing for more than four total minutes a day is more of a bonus than anything.

During those four crucial minutes each day, make sure you’re not harming your teeth or gums by brushing too hard.

Using OTT force when you brush can create little notches in your teeth or harm your gums, Dr. Cram says. Signs of over-brushing include tooth sensitivity, receding gums, or indents where the tooth meets the gum, Lisa Simon, D.M.D., an oral health and medicine integration fellow at the Harvard School of Dental Medicine, tells SELF.

Instead of brushing so hard you’re basically punishing your mouth, gentle pressure with a soft-bristle toothbrush will suffice. And be sure to swap your toothbrush out for a new one every three or four months or if the bristles start looking frayed, the American Dental Association says.

As long as you’re brushing your teeth twice a day for two minutes each time, you’re doing a lot to keep your mouth healthy.

“Most dental problems—like tooth decay, gum disease, and other common problems—are really preventable,” Dr. Cram says. No matter how busy you are, you can spare four minutes to brush each day, along with another minute or so to floss at least once per day, too.

With that said, maintaining oral health isn’t just a matter of brushing your teeth and flossing. You’ll still want to pay regular visits to your dentist and to reach out to them if you notice anything unusual. But at the very least, spending four minutes of QT with your teeth every day can go a long way in keeping your pearly whites, well...you get the idea.

Adapted by Institute of Dental Implants & Periodontics from original SELF post (March 13, 2018)