What does it mean when you have white gums?

In rare cases, white gums can indicate oral cancer, so it is essential to see a doctor for a proper diagnosis.

Read on to learn more about white gums and discover how to get rid of them with home remedies and medical treatments.

What are the causes

The following conditions and situations can lead to white gums:

Leukoplakia is an oral condition that can turn parts of the gums white.

It causes white patches to appear in the mouth that cannot be removed with a toothbrush.

Most cases of leukoplakia are harmless, but some are precancerous.

The American Cancer Society advises that patches occurring alongside red lesions are more likely to be cancerous or precancerous.

Doctors do not know exactly what causes leukoplakia, but tobacco use is thought to play a role.

Leukoplakia may turn the gums white but most cases are
harmless. Image credit: National Cancer Institute, 2013

Anemia occurs when the body lacks healthy red blood cells. These cells are needed to carry oxygen around the body.

Anemia comes in different forms, depending on its underlying cause. Common causes include iron or vitamin B12 deficiencies, Crohn's disease, and celiac disease.

Symptoms of anemia include:

People with anemia may also have pale skin, including the skin on the gums. This can cause them to look white.

Canker sores, or mouth ulcers, are lesions that develop in the mouth and on the gums. They can be very painful, especially when speaking, eating, or drinking.

The ulcers are typically round or oval and have a pale center with a red border.

Canker sores that appear on the gums can make certain areas of the gumline look white. However, they do not change the color of the gums in the entire mouth.

Gingivitis is a mild form of gum (periodontal) disease. This common condition affects approximately half of all American adults. Poor dental hygiene is the most common cause of gingivitis.

People with gingivitis may experience irritated, red, and swollen gums around the base of their teeth. They may also notice loose teeth or bleeding when brushing and flossing. Over time, the condition can cause the gums to turn white and recede.

Oral lichen planus causes lacy white patches to appear on the gums, tongue, and other tissue inside the mouth. It is a chronic autoimmune condition that causes a range of other symptoms, including pain, bleeding, and gum inflammation.

People with oral lichen planus should go for regular dental check-ups, as they have an increased risk of nutritional deficiencies, mouth infections, and oral cancer. 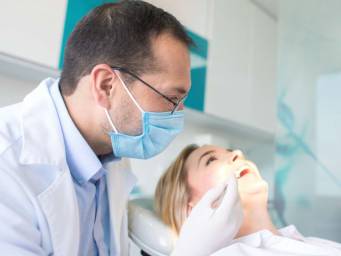 Some conditions can cause the gums to turn black.

Also known as candidiasis, oral thrush is a yeast infection that causes raised, creamy-white sores in the mouth.

The sores appear on the inside of the cheeks, the tongue, or the gums. Babies, older adults, and people with diabetes are at greater risk of oral thrush.

The trauma of a tooth extraction may cause the gums surrounding the extraction site to turn white. Gums will usually return to their normal color within a few days.

Getting teeth professionally whitened can cause the gums to look brighter or whiter than normal. They should return to their usual color within a few hours.

According to the American Cancer Society, around 51,000 people in the United States will get oral cavity or oropharyngeal cancer in 2018.

White gums are a symptom of oral cancer. This condition can spread quickly, so it is vital to be aware of other signs and symptoms, including:

Pain, sores, and headaches may also occur with white gums.

Symptoms that may occur alongside white gums vary depending on the underlying cause of the color change.

Sometimes, a person may have no other symptoms. In other cases, white gums can be accompanied by:

Keeping track of any additional symptoms can help a doctor or dentist diagnose the underlying cause of white gums.

White gums are treated according to their underlying cause.

Minor canker sores typically heal within 2 weeks, usually without any treatment. Major sores can take up to 6 weeks to heal and should be evaluated by a doctor or dentist.

Treatments for canker sores that persist include:

Patches of leukoplakia can be frozen off or removed with a scalpel or laser. People with the condition should avoid smoking or chewing tobacco.

A doctor may prescribe antiviral drugs if a person also has a weakened immune system.

There is no cure for oral lichen planus, but a person can manage the symptoms with:

Oral thrush is typically treated with antifungal medications. A doctor may prescribe medication in the form of a tablet, lozenge, or mouth rinse.

Over 50 percent of oral cancer cases go undetected until the cancer has spread to other areas, such as the lymph nodes, so it is essential to see a doctor as soon as possible.

Treatment options include chemotherapy and surgically removing the affected areas.

White gums can be managed by brushing the teeth twice daily, flossing, eating a balanced diet, and quitting tobacco products.

Several home remedies can alleviate the symptoms associated with white gums, although they may not necessarily treat the underlying cause.

To manage white gum conditions at home, a person can:

The outlook for white gums varies depending on the underlying cause, the health of the individual, and the treatments used.

Canker sores, for example, often clear up within a few days. They may not require any treatment. Other conditions, such as oral lichen planus, require lifelong management.

White gums can be a sign of serious conditions, such as oral cancer, so it is essential to see a doctor for a diagnosis. Early treatment can reduce the risk of complications and improve the long-term outlook.