Gum Health Basics: What to Look Out For and How to Prevent Trouble

Everybody wants to have gleaming teeth, of course. But a healthy smile actually begins with your gums. “They are like the foundation of a house: If you have any damage at the base, it starts to impact the entire structure,” says Richard Kao, DDS, president of the American Academy of Periodontology in Cupertino, California. Sore, puffy gums can ultimately lead to tooth decay and bone loss—and possibly problems beyond your mouth, too. Studies have tied poor oral and gum health to conditions that involve the immune system, lungs, heart, and brain.

Most gum troubles can be blamed on plaque, a sticky film that coats our teeth and contains millions of bacteria, says Dr. Kao. If plaque isn’t removed daily, it begins to harden into a crusty layer called tartar. The bacteria in the tartar produce acids that erode tooth enamel and also irritate your gums, causing tenderness and inflammation known as gingivitis.

“Gingivitis is usually reversible by getting better about brushing and flossing, and seeing your dentist or periodontist, who can remove the tartar,” says Sally Cram, DDS, a spokesperson for the American Dental Association. But if it’s left untreated, gingivitis can progress to periodontitis—a more serious infection in which “pockets” form along the gumline and fill with bacterial toxins that break down the bones and tissue that hold teeth in place. Eventually, teeth can become so loose they fall out, or need to be removed.

As if that weren’t bad enough, doctors suspect that inflammation in the gums may trigger inflammation throughout the body. That may explain why studies have shown an association between gum disease and a variety of health issues, including heart disease and stroke, Alzheimer’s, lung cancer, and rheumatoid arthritis. Researchers have even found that pregnant women with gum problems may be more likely to have a premature or underweight baby.

Luckily, keeping your gums happy isn’t hard. “Ninety-nine percent of gum issues can be prevented with a few good habits,” says Dr. Cram, who also runs a periodontal practice in Washington, D.C. And if you’re already suffering from gum inflammation (nearly 1 in 2 adults in the U.S. has some form of gum disease), there are ways to stem the damage and possibly undo it. 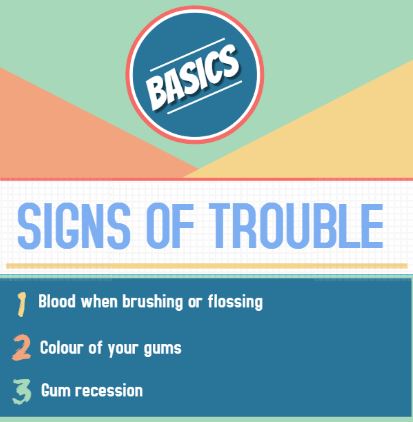 Have you noticed a little blood when you brush or floss? It may just be that you’re brushing too hard, but bleeding can also indicate a buildup of plaque. For the next week, brush more gently; if you’re still seeing blood seven days later, make an appointment with your dentist, who can remove any tartar with a professional cleaning.

The color of your gums can be another signal that something’s wrong. Healthy gums range from medium pink to light brown, depending on your skin tone. Dark red gums are a sign of periodontitis, so if you notice the shade is off, call your dentist.

Keep an eye out for gum recession, too. Look for tissue that’s pulling back, exposing the roots of a tooth, or several teeth. Recession can be brought on by genetics (thanks, Mom and Dad), vigorous brushing, or grinding your teeth at night. But in the vast majority of recession cases, plaque and tartar are the culprits, says Dr. Cram.

Unlike early stages of gum disease, gum recession is not reversible. Chances are you may develop a sensitivity to hot and cold temperatures, since the exposed root of a tooth isn’t protected by a coating of enamel like the rest of the tooth. Ask your dentist about trying a desensitizing toothpaste; these formulas are made with compounds that stop up the tiny canals in the outer layer of the root, to shield the nerves inside. For a severe case of recession, you may need a gingival graft. In this simple procedure, a periodontist takes tissue from the palate and uses it to repair the receding area of gumline.

It’s unfair but true: You can be a stickler for oral health and still develop gum issues. That’s because totally normal hormonal changes in your body can wreak havoc in your mouth.

When a woman is pregnant, for example, rising progesterone can make her more susceptible to the growth of gingivitis causing bacteria. (You might even notice bright red, puffy gums when your progesterone spikes a day or two before your period—a phenomenon known as menstruation gingivitis.) Gum woes are common during perimenopause, too: Fluctuations in estrogen levels can create dryness in the mouth, and with less saliva present, microbes can thrive.“During these times, it’s extra important to stay on top of your oral hygiene,” says Dr. Cram. “And check in with your dentist about possibly coming in for care more frequently.”

You learned the basics of oral care when you were a kid—but a few details can make a big difference. For starters, use an ADA-approved brush with soft bristles. Soft bristles are not only easier on your gums but they are also more flexible and can reach underneath the gumline to sweep away bits of food and plaque, Dr. Cram notes.

Wondering whether you should upgrade to an electric model? A review of research found that powered brushes removed 21 percent more plaque than the manual kind after three months of use. But if you brush properly, you probably don’t need to spend more than a few bucks on your toothbrush, says Dr. Cram.

As for proper brushing, think of it more like gentle polishing: Make circular motions with your toothbrush on the surface of your teeth—and brush for at least two minutes. Most people only last 30 seconds, says Vera Tang, DDS, a periodontist at New York University’s College of Dentistry. (If that’s you, an electric toothbrush with a built-in timer may help.)

Another common mistake people make is not flossing before they brush. A few years ago, the Associated Press reported there was little scientific evidence that flossing was worthwhile—which led to a media frenzy and much confusion. But experts point out that the studies to date are too short in duration to show the long-term preventive benefits of the habit. They stand by flossing for the simple reason that it removes food and plaque in spots your toothbrush can’t reach. (Still not convinced? Just try flossing after you brush.) “The trick is to be precise,” says Dr. Tang. Hug the string against the side of the tooth in a C shape, and slide it gently up and down two to three times.

If you’re not a fan of string, floss picks (which look kind of like a mini archer’s bow with a handle) can get the job done. And soft picks—those wiry, cylindrical little tools—are great if you have wider spaces between your teeth, or dental work.

Water picks, which use a spray of H2O to dislodge debris between your teeth, can be helpful for people with bridges or braces, but experts say they shouldn’t replace regular flossing. “It’s like washing your car,” says Dr. Tang. “Using a hose to spray dirt off your car isn’t going to get it as clean as physically scrubbing it.”

Finally, don’t skip the recommended semiannual visits to your dentist or periodontist. Aside from giving your teeth a thorough cleaning, your doc can detect problems early on, before they get worse. “Some patients don’t experience any obvious signs
of gum disease,” says Dr. Kao. “But a professional can spot trouble and nip it in the bud.”